Venezuelans in the Streets to Support Constituent Assembly

The action aims to galvanize popular backing for the constituent members who were elected by more than eight million voters. Members of Venezuelan social movements and worker's organizations have been marching in support of the country's National Constituent Assembly. They set off from Morelos Square in Caracas and headed to the parliament building where the Constituent Assembly is based. The march aims to build further support for the members of the ANC who were elected on J
5 views0 comments
teleSUR English

US Announces New Sanctions on Venezuela in Interventionist Move

The U.S. action is aimed at interfering in the upcoming Venezuelan elections for the National Constituent Assembly. The U.S. Treasury Department announced new sanctions on 13 senior officials of Venezuela's government Wednesday. “As President Trump has made clear, the United States will not ignore the Maduro regime’s ongoing efforts to undermine democracy, freedom, and the rule of law,” Treasury Secretary Steven T. Mnuchin said in a press release. On July 17, President Donald
35 views0 comments 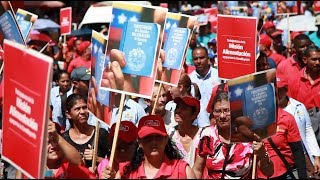 On July 30th, Venezuelans will elect a people's body called the "Constituent Assembly" comprised of hundreds of representatives across the country with the power to redraft the constitution. U.S. politicians, press and opposition in Venezuela are calling the process a "coup" that should be boycotted by all. Abby Martin addresses the criticisms with Head of the Presidential Commission to oversee the Constituent Assembly process, Elias Jaua, speaks to supporters and participant
10 views0 comments
teleSUR English

Checking facts versus fiction on Venezuela's process to rewrite its 1999 Constitution. Can you guess what's true or false about Venezuela’s Constituent Assembly? For months, the opposition in Venezuela have held protests demanding elections and have even requested a constituent assembly. Now that President Nicolas Maduro is supporting those demands, they have decided to campaign against them. More importantly, they have spread misinformation about the upcoming National Consti
12 views0 comments