This Aint About Us: The Key To Ethnic & Class Solidarity Is Whites Eradicating White Supremacy

Introduction “The logic of ‘race as a social construct’ must be tightened and the focus sharpened. Just as it is unhelpful, to say the least, to euphemize racial slavery in continental Anglo-America as ‘the Peculiar Institution,’ instead of identifying the "White race," itself, as the truly peculiar institution governing the life of the country after emancipation as it did in slavery times; just as it is not ‘race’ in general, that must be understood, but the ‘White race,’ in
336 views0 comments
Rhymes Media Group

Hello Rhymes Media Group Fam. Today's #IndependentMediaMonday was an immense pleasure and treat: Ben Norton, the brilliant political analyst and investigative reporter for Alternet. Ed & Ben cover the gamut of the happenings in the world today. From propaganda to US foreign policy; from Russia to Syria. Join us for an hour of great conversation and dialogue about the the important issues of the day. If you can hear Ben speak about issues of great importance and not come away
3 views0 comments 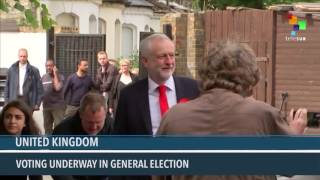 From the South 06/08: teleSUR's Daily News for the Web

Thursday’s news updates of all the most important events in the world, written and produced in the Global South, with fresh perspectives from our international team of correspondents. #Venezuela #JeremyCorbyn #FBI #elections #UK #politics #news #currentevents #thedeepstate #Mexico
1 view0 comments

Mainstream commentators display amnesia when they describe former FBI Directors Robert Mueller and James Comey as stellar and credible law enforcement figures. Perhaps if they included J. Edgar Hoover, such fulsome praise could be put into proper perspective. Although these Hoover successors, now occupying center stage in the investigation of President Trump, have been hailed for their impeccable character by much of Official Washington, the truth is, as top law enforcement o
7 views0 comments