The Black Lives Matter Movement is now being hotly debated in this nation and it is still unclear as to what the future may hold. Although its thrust is chiefly about law enforcement's racist attitudes towards the Black community resulting in harassment, brutality and murder it also points to other deep and abiding problems A prescription was given to poverty, joblessness and institutional racism in the form of the Kerner Report. What it outlined puts into perspective the pre
124 views0 comments 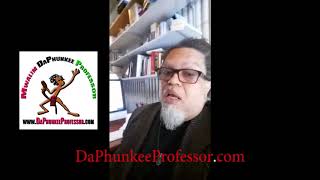 DaPhunkeeProfessor.com: Black History Month Is Supposed to be a Launch Pad, Not a Destination

Note: Rhymes Media Group would like to introduce to you an old friend & collaborator - in a new collaboration, however - Morgan James Peters and DaPhunkeeProfessor.com. Listen to his various insights and pearls of wisdom here on RMG, DaPhunkeeProfessor.com or subscribe to his YouTube channel. Originating from the efforts of Carter G. Woodson, whose landmark dissertation ' The Mis-Education of the Negro' challenged the social structure of American education. However, the white
18 views0 comments
Ezekiel E. Rhymes, Columnist, Rhymes Media Group

This is Part One in a series Introduction In the United States, many have claimed that the U.S. is a Christian nation. From this viewpoint, many Conservative Evangelical Christians have developed a sense of nationalism, an ideology that exceeds patriotism. From this ideology, many Christians have placed the U.S. on top of every other nation. From this perspective, they have developed a great sense of pride; so much so, they will cheer on America in whatever it is doing becaus
44 views0 comments

RMG's Flashback Friday: Turning Racism Upside Down To See It Right Side Up: The Remix

Republican Party darling Mike Huckabee, during a recent speech, decided to dispense some tough love to a predominantly white audience when he voiced his concerns about the state of affairs in American white communities. "The epidemic of whites involved in drunk-driving fatality accidents is deplorable," Huckabee said. He cited the National Highway Traffic Safety Administration's 2000 statistics that showed that white male drivers between the ages of 21-34 constituted the larg
8 views0 comments
Whitney Webb, Mint Press News

RMG's #IndependentMediaMonday: The right-wing opposition of Venezuela has been caught endorsing and committing violent acts multiple times, despite claiming to be “peaceful.” Their latest targets include two U.S. journalists who have been threatened with lynching for their reporting on the ongoing chaos in Venezuela. #economy #history #mexico #Venezuela #independentmedia #politics #news #currentevents #conflict #war
40 views0 comments
Glen Ford, Black Agenda Report

Black-Hating Negroes and Their Uses: David Clarke at Homeland Security