This was RMG's #IndependentMediaMonday and our, very special guest, was the superb, independent journalist, Eva Karene Bartlett. Eva Bartlett fresh from her journey to the DPRK in North Korea, talks about her insights and discusses w/Edward Rhymes the issues facing that nation. Ed and Eva talk about the provocative war games that US have engaged in on right outside North Korea - and North Korea as the simulated enemy in these war games; the anti-North Korean propaganda machin
450 views0 comments
Rhymes Media Group

Hello Rhymes Media Group Fam. On this episode of Rhymes Reasons, Dr. Rhymes talks with Minnesota-based scholar, journalist and theologian Les Lester. We cover the lack of Black studies in our public school curriculum; we discuss the role miseducation has played in the current circumstances of Blacks in America and what can be done to remedy that painful reality. Join us for this hour of insightful dialogue and discussion. Thanks for stopping by RMG Fam. See you there; see you
28 views0 comments
teleSUR English

The intense inner core is expected to pass near Dominica in the next few hours. Hurricane Maria has rapildy increased in strength to a major Catergory 4 hurricane as it closes on the Leeward islands. The eye of the storm is expected to pass close to Dominica in the coming hour or two, before heading towards the Virgin Islands and Puerto Rico. TeleSUR spoke to Dominican broadcaster Daryl Titre at 5:42pm, a little over two hours before Hurricane Maria was due to strike land. He
5 views0 comments 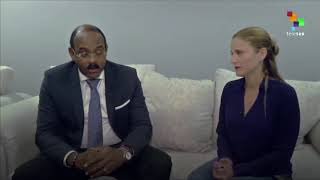 Antigua and Barbuda PM Thanks Venezuela for Irma Aid

Prime Minister Gaston Browne said Venezuela has "gone above the call of duty." Prime Minister of Antigua and Barbuda Gaston Browne has thanked Venezuelan President Nicolas Maduro for his "timely intervention" during Hurricane Irma. In an exclusive interview with teleSUR, Browne said that "If it wasn’t for the availability of the military aircraft from Venezuelan we would not have been able to evacuate the Barbudans" ahead of Hurricane Jose. Around 180,000 Barbudans were evacu
4 views0 comments
teleSUR English

A Perspective on Antifa

Lately, there has been much criticism of the activist group known as “Antifa” (short for “Anti-Fascist”) by both the Right and, surprisingly, among the Left. Cries of “violence only begets violence,” and “divide and conquer strategy” has poured out from their mouths. The world-renowned journalist, Chris Hedges, has also attacked Antifa by saying, “Behind the rhetoric of Antifa, the Black Bloc, and the so-called ‘alt-left’, about capitalism, racism, state repression and corpo
80 views0 comments
Rise Up Times, RMG Affiliate

Trump: Behind Your Back & In Your Backyard

Here are just a few of the Trump administration actions that have come into my email box in the last few days. Click the titles to read more and take action. The Wilderness Society: The Trump Administration is Stealing YOUR Land The Nation: The Department of Justice Is Overseeing the Resegregation of American Schools CMD: Ambitious Effort to Attack Organized Workers & End Progressive Politics in America State Policy Network Attacks Public Sector Workers as Waters Rise in Tex
8 views0 comments
Margaret Kimberly, Freedom Rider

“The carceral system must be torn out root and branch.” Even most leftish white Americans like to think that their country is good and its institutions are fair and equitable. According to this wishful thinking human rights abuses only happen in faraway places and injustices here are resolved by reining in a few bad apples. The facts say otherwise and prove that the United States is consistently one of the worst human rights violators in the world. The cruelty of its prison s
8 views0 comments
Mel Reeves

"Not Who We Are?" No, this is UNEQUIVOCALLY the USA

Observing Van Jones cry on CNN, twitter posts of #thisisnotus and other well -meaning folks cry and wring their hands, because the president has exposed the real US, is an indication of self- deception. Jones and folks who share his affinities had convinced themselves that this is not a racist nation. Yet the evidence, recent and not so recent, along with the country’s past indicate the opposite. The US has been organized around White Supremacy since the first settlers set fo
8 views0 comments 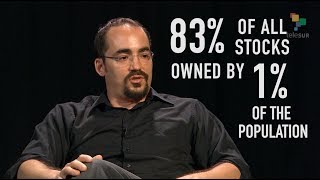 Peter Joseph is the founder of the Zeitgeist Movement, a grassroots, worldwide organization that advocates an alternative economic system based on sustainability, cooperation and human need. His most recent book, ‘The New Human Rights Movement,’ delivers a startling exposé about the violent oppression that defines our economic order, while issuing an urgent call for global activism to unite to replace it. Abby Martin sits down with Joseph to talk about the contradictions and
12 views0 comments
teleSUR English

DACA protections have been granted to more than 750,000 people in a country. U.S. President Donald Trump is expected to rescind the DACA program that protects nearly 600,000 undocumented immigrants who entered the country as children but will allow them to stay until their work permits expire, a senior administration official has said. Trump’s decision could be announced as early as Friday but could also come next week, said the official, who added that the president could al
4 views0 comments
Rhymes Media Group

Hello RMG Fam. Today is #IndependentMediaMonday and our guest is a RMG favorite, Gilbert Mercier, Co-Founder/Co-Editor of News Junkie Post. Gilbert is the author of The Orwellian Empire and has written many compelling pieces over the years. Today's discussion was centered around two of his most recent essays: New Orleans a Decade after Katrina: ‘Waiting for Godot’ Courtesy of Disaster Capitalism and Mercier and Draitser Discuss Disaster Capitalism in Post Katrina New Orleans.
41 views0 comments
Rhymes Media Group

Rhymes Media Group, in keeping with our commitment to advocacy journalism, begins, today, the series: RMG's Anti-Racism 101. Rhymes Media Group began, and continues, as a mechanism for persuasion for those who are willing to be persuaded. In other words, we are not looking for a show of hands - popular consensus is one of the WORSE metrics for determining what's true. It can be hard and confusing, at times, to understand the ins and outs of prejudice, discrimination, racism &
40 views0 comments

RMG's Anti-Racism 101: How To Understand The Scope & Nature of Societal, Institutional and P

Introduction Rhymes Media Group, in keeping with our commitment to advocacy journalism, begins, today, the series: RMG's Anti-Racism 101. Rhymes Media Group began, and continues, as a mechanism for persuasion for those who are willing to be persuaded. In other words, we are not looking for a show of hands - popular consensus is one of the WORSE metrics for determining what's true. Racism exists when individuals because of their race, are: Denied access to services or opportun
146 views0 comments

Hello Rhymes Reasons Fam. This is a May 2, 2017 interview of - for a RMG record 3rd time - CIA-agent John Kiriakou. Former CIA officer and heroic whistleblower - and he just happens to be in my personal Courage Hall of Fame. He was one of the first government officials to reveal the American torture of detainees and prisoners. John is an associate fellow with the Institute for Policy Studies, and contributor for Huffington Post. He appears in the 2014 documentary Silenced, a
29 views0 comments

Good morning Americans, it’s the year 2017 in the U.S. of A. Or is it 1640? No wait, is it 1882, 1896, 1942 or 1950? This past week we have heard the terms “un-American” and “foreign” flung around with great (and some would say alarming) frequency. The aforementioned dates are not arbitrary or random; they represent instances in our American history when the un-American card was played. Further, they tell the story of who gets to determine what or who is truly American. In 16
21 views0 comments
Rhymes Media Group

Well, it was a long time coming, but we were finally able to nail down a sit-down with a platinum-standard investigative journalist and host of the Empire Files, Abby Martin - it was WELL worth the wait. Abby's microphone and camera has traveled to places such as the illegal settlements in Palestine, the US-backed turmoil in Venezuela, as well as the Amazon Rain Forest, to name a few. Ms.Martin was also interjected into the 2016 US elections, when a US intelligence report, er
368 views0 comments
teleSUR English

Maduro Says Relations With US Are at Their ‘Worst Moment’

The Venezuelan president reiterated his desire to maintain peaceful relations with all countries and rejected threats to intervene in his country. Venezuelan President Nicolas Maduro said that diplomatic relations with the United States are currently at its "worst moment" after Washington has threatened to use military force against Venezuela. "I have tried to send messages of respect (with U.S. President Donald Trump), even though we have big differences," Maduro said during
8 views0 comments
1
2
345